Home → About us → Staff → Luis Mediero 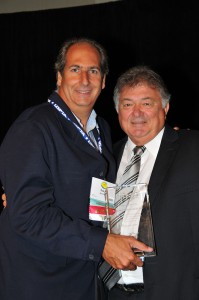 He soon had the opportunity to give his first tennis classes and discovered his interest in the teaching of this sport. He quickly achieved his dream of dedicating his life to this passion: the teaching of tennis.

His first steps consisted in reaching a level of education unequalled in the sports industry, with 8 international Master’s degrees and more than 150 qualifications. This has put him in a privileged position for spreading the popularity of sports.

To all this, we can add years of experience in management, sporting consultancy and event organisation. First working in the best academies and tennis centres in different parts of the world, then establishing his own school, he ended up directing the biggest private organisation dedicated to the integrated management of tennis centres, in which he worked with players of all ages, abilities and levels of play.

In 1989 he set up the RPT – Registry of Tennis Professionals with the aim of offering educational programmes, international certification and integrated services to tennis coaches and their teaching centres. Now 29 years old, the RPT has achieved world leader status with more than 22,500 accredited trainers in 122 countries.

His eagerness to promote tennis has lead him to organise programmes and activities in which more than 500,000 players have taken part. In 1995 he entered the Guinness Book of Records for ‘giving the biggest tennis class in history’. In 1996 he set up the National Circuit of Promising Youth Players which has become a national reference point for under-16 players (Juan C Ferrero won the first tournament). In 1997 he developed ‘Streetennis’, a revolutionary programme to bring tennis to the Spanish city streets and later with the ATP he developed ‘Smashtennis’ in different world cites. In 2000, ‘Charlytennis’ helped young people to get started in the sport; ‘Wheeltennis’ was designed for wheelchair tennis in 2001; ‘Acedemytennis’ for competitive players in 2002; and ‘Adultennis’ revolutionised the teaching of adult players in 2004.

In 2006 he created a revolutionary teaching method named ‘CDS:Concept Drive System’, which consists of a new concept based on a direct drive system and includes the brand new multimedia analysis ‘5 Actions’. In 2008 he organised the ‘Streetennis Cup’ and ‘Adultennis Cup’ tournaments and in the same year registered the ‘S2P: Simple, Sensible and Practical’ methodology, which forms the basis of all the RPT educational programmes: teaching sport in a simple, sensible and 100% practical way. In 2010 he patented ‘WES: Web Education System’, using the internet as a platform so that all the coaches could be interconnected ad permanently updated.

In 2012 he presented a new educational innovation TeTaFiMe which is composed of four pillars: Te/technical, Ta/tactical, Fi/physical and Me/mental which have been brought together, linked and interconnected so that any individual can reach their Ideal Competitive State.

In 2014 he presented HdP- Human Development Pathway. The human being develops along a path to create its character and sport forms a very important part of this process. In 2015 he promoted ‘ADVISA: Feel Powerful’, a formula that helps sporting and corporate professionals to reach their highest level of performance, maximising their energy and developing a superior psychophysical state without compromising their health or personal life.

More than 30 years of professional career related to this sport has led to him to being considered one of the 10 most influential people in international tennis education (2005). Madiero has also been recognised on two occasions as ‘Best worldwide Tennis Teacher’ (1994/1997) and in 1993 was awarded an International Business Master’s for ‘his high professional values in the teaching of tennis’.

In his desire to spread tennis at all levels, Mediero has given courses and speeches in more than 80 countries and has published 9 books, 24 videos, 22 teaching manuals, 20 CD-ROMs, 30 DVDs, collections of masterclasses and hundreds of articles on teaching for national and international media. His book ‘Beginner’s Tennis’ has become a ‘best seller’ and is considered the biggest selling Spanish language tennis book ever published. Moreover, he has worked as a commentator for various radio and television stations.

Recognised as one of the prime movers in Spanish tennis, he has run training courses and certified more than 6,000 coaches in every Spanish autonomous region and in nearly every city. Thus, his contribution to the development of Spanish tennis is more than proved, through the clubs and schools who have produced the players and through the players themselves who have gone on to harvest a collection of major international triumphs in the last two decades.

The Spanish Tennis Federation has announced, on november 2017, its agreement with the RPT (Registro Profesional de Tenis) to promote the practice and coaching of tennis, and thus has acknowledged the task that RPT has fulfilled in this area for the past 27 years.

In 1989 he created International Tennis Consulting with the aim of offering a wide range of consulting services in the analysis, design, construction, maintenance and management of sporting centres, as well as in the integrated management of sporting events. This was fruit of his experience in having visited hundreds of sports clubs and tennis schools throughout the world.

His great desire for innovation led him to try and extend his success in tennis to other sports, using the same philosophy and training system. In 1993 he decided to set up the RPP – Registry of Padel Professionals, which very quickly became one of the main promotors of a sport that currently has around 4 million players in Spain.

The potential growth and extension into sports other than tennis led him to transform International Tennis Consulting into International Coaches Institute. From 2002 onwards, the International Coaching Institute started to function as an umbrella organisation for the different professional registries in order to help them develop and expand internationally, and to offer them all the tools necessary for the teaching and development of individuals through sport.

Later, he decided to use his experience of tennis and padel in a new field: golf. Thus the RPG – Registry of Golf Professionals was created in 2002. In very few years it has become one of the leading organisations to provide training programmes and event organisation in the golf market.

Little by little, other sports have been added, in order to include the main activities shared by most sports centres. The strong growth of the fitness and spa industry led him to close the circle by setting up the RPF & RPS – Registry of Fitness and Spa Professionals in 2006.

SportsMarketing promotes sport via event organisation, competitions, tournaments, clinics and educational activities in which more than 750,000 players have taken part. It also develops promotional and sponsorship marketing plans related to the sporting industry.

The Registry of Multimedia Professionals: RPMutimedia’s mission is to share the company’s interactive and communication devices with their clients. The Registry of Racket Stringers Professionals (RPE) was created to offer training programmes, international certification and integrated services to the racket stringing and preparation professionals. In 2013 the Sports Marketing Institute was set up to train and develop courses for sporting representation, the organisation and commercialisation of sporting events and consulting in the world of entertainment.

In 2015 ICI Lab was set up, an ideas laboratory for the sporting and corporate worlds, which creates, develops and carries out different personal and professional development programmes.